You may have heard that it’s election season here in the U-S-of-A.

You may have heard that it’s election season here in the U-S-of-A.  We figured what better way to kick off our Live Production Look-Back series than re-visiting our work with Hillary Clinton and the US State Department back in 2013.  Enjoy. 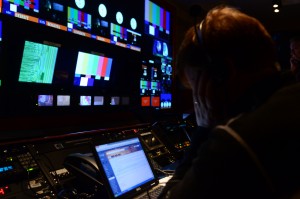 Before we begin, a clarification: no, ‘townterview’ is not a typo.  That was an actual phrase (unfortunate as it may be) that was used in the title.  We lay no claim to the ownership of said phrase.  OK, now that that’s out of the way…

During Hillary Clinton’s last week in office as Secretary of State, she wanted to conduct one final town hall meeting.  Secretary Clinton enjoyed interacting with the millennial demographic – both domestic and foreign – and had a great fondness for the intimacy and interactive nature of the town hall format.  So a plan was hatched to put together a live town hall production from a studio location in DC that would feature live remotes from international locations across the world.  Additionally, the program would rely heavily on social media – giving viewers at home the chance to submit questions in real time via Twitter and Facebook which were integrated into the show.  The initial plan was to produce the show at the State Department using DOS’s broadcast equipment and personnel.  However, the broadcast department at DOS did not feel they had the technical capabilities to produce such a complex production and wasn’t comfortable with committing to such a high profile project.  Instead, they referred Secretary Clinton and her team to Broadcast Management Group. 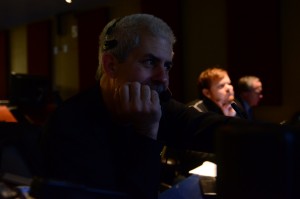 We were able to secure the Knight Studio at the Newseum in downtown DC for this project, which is a great, state-of-the-art production facility.  They have all of the technical infrastructure and connectivity that we needed for this project, which took a lot of the pressure off.  The bigger challenge, however, was the timeline we had for putting the production together: 72 hours (48 of which were a weekend).  We were officially awarded the contract on a Friday and the program was scheduled to air early afternoon on the upcoming Monday.  But that’s the nature of the beast when you’re dealing with live production, so we got to work.

We planned for 7 live feeds total during the course of the show, one from England, Japan, Lebanon, Columbia, Nigeria, India and Australia (it was truly a global town hall in that we had representation from every continent on earth with the exception of Antarctica).  Each remote, with the exception of Australia (which was a surprise Skype feed), featured in-studio talent with a panel of guests.  The talent and guests would all have the chance to ask questions to Secretary Clinton in real time.  Dealing with 7 different time zones and some language barriers, we had to carefully coordinate and plan the logistics behind each live remote.  Additionally, DOS wanted each international broadcaster to cover the cost of their in-studio production and transmission to the Newseum in DC, which is something we had to negotiate with each broadcaster. 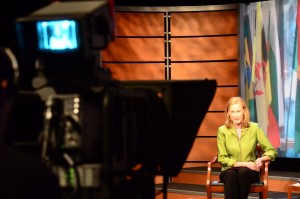 I remember the morning of the show being much less chaotic than I was expecting.  We went through our transmission tests country by country.  I seem to remember having some issues with Columbia, but we were able to get things ironed out and when it came time for the live show, everything went as smoothly as possible.

As I stated above, Secretary Clinton had a great fondness for town halls and had participated in a large number of them during her time in office.  After our show, she made it a point to stop by the control room and personally thank everyone on the production crew.  She told our director that the “global townterview” was by far her favorite town hall.  Granted, she’s a politician, so we have to take that compliment with a grain of salt, but it still felt good.