The Challenges of Live Production in Times Square

If I can be completely frank, Times Square is probably my least favorite place in New York City.

If I can be completely frank, Times Square is probably my least favorite place in New York City.  Maybe it’s the endless sea of selfie sticks or the weird, knock-off Buzz Lightyear, but there are so many other areas of NYC that I’d much rather explore.  But despite my desire to not find any redeeming qualities about the place, there’s one thing that’s hard to deny, and that’s the almost physical energy it possesses.  There’s something slightly intoxicating about standing in the middle of Times Square.  The lights.  The sounds.  The naked cowboy.

From a live production standpoint, Times Square is about as exciting a venue as you can get.  BMG has been fortunate to have produced a number of shows from Times Square.  All of them were absolutely great experiences, but extremely challenging in their own way.  Here’s a re-cap of some of the most challenging aspects of working in Times Square – one of the craziest, yet rewarding environments to work in.

Oh, the people.  The ironic thing about working a production in Times Square is that you’re often starting your day when people are ending their night.  There’s never a shortage of people hanging out (or stumbling through) Times Square.  Most of them keep to themselves, except the tourists, who undoubtedly want to know what you’re doing.  The (very) early morning crowds are pretty light, but once you hit mid-morning, things can get hectic.  We’ve found it’s best to work your schedule so that you’re setup and ready to go before 9:00am.  Otherwise, dealing with cable runs through hoards of people can be a huge challenge.

Surprising that parking in New York City would be a challenge, right?  When we start planning a live production in Times Square and we have our footprint ironed out, we determine the best place for our mobile unit or production gear, knowing that we’ll most likely be stuck with option C, D or (most likely) E.  Flexibility is crucial when you’re working in such a tough environment.  Then there’s the small feat of actually parking the truck (this is after you’ve gotten the parking space permitted, of course).  During the 2014 CBGB Music Festival, we witnessed our truck driver k-turn a 50’ semi truck in the middle of Times Square.  It was quite a feat and I’m still not 100% sure I didn’t dream the whole thing.  Parking can be a nightmare – there’s no way to under-sell that.  We’ve had parking spaces get nixed because of fire hydrants and street signage that didn’t play well with an expand-o unit.

There are only a few sections in Times Square where you can get a clear satellite signal.  Site surveys are absolutely key… multiple, multiple site surveys.  If you’re able to get the sat truck permitted and secure the right parking space, it’s definitely one of the easier ways to get a signal out.  There are also some fiber drops available, but that’s all contingent on which blocks you’re working from.  That said, the City and the Times Square Alliance are diligently working the make Times Square more production friendly. 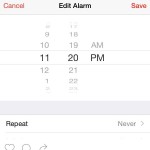 When working in Times Square, you typically rent plazas for a 24-hour window.  That means you have 24-hours to get in, setup, shoot and strike.  Given that you want to have the majority of your gear in place before Times Square gets packed with people, that often means an early morning call time.  Working on Epson’s “Swimming in Ink” webcast marks the first time I’ve ever set my “morning” alarm for 11:20pm for a midnight call time (attaching a screen shot of BMG’s Instagram account as evidence).  I was lucky as my hotel was just down the street – some of our crew members who live outside Manhattan had it worst.  If possible, plan on some extra hotel rooms for your crew – they’ll always appreciate it.

Cable runs can be a challenge, especially depending on where you end up parking your truck or equipment.  With the amount of foot traffic in Times Square (hundreds of thousands of people per day), everything needs to be protected, which means making sure you have ample cable ramps.  In the event you need to fly cables, first of all: good luck, and second: make sure you allow ample time to deal with the permitting process.  We generally run spares (sometimes double spares) to each of our camera locations to be safe.

Times Square is probably the harshest RF environment in the country.  If you’re planning any wireless transmissions, make sure you have someone handling frequency coordination.  And some additional antennas and signal boosters wouldn’t hurt.