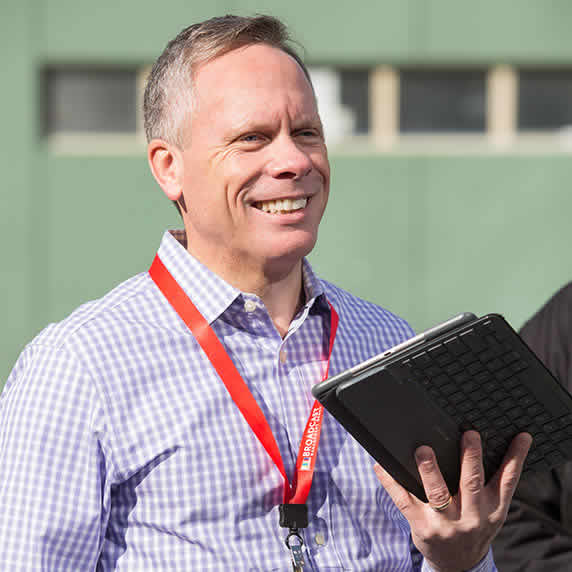 Todd Mason is the founder, CEO and driving force behind Broadcast Management Group.

Todd started in television at the age of 15, running cameras at his family’s church. That experience helped inspire a love for broadcasting and an award-winning career that now spans more than three decades.

In 1994, Todd helped take the film industry from Steenbeck to non-linear editing. In 2002, he built the world’s first tapeless broadcast operation. In 2018, Todd launched a full-time over-the-top (“OTT”) network for America’s top brokerage and investment firm TD Ameritrade. In 2021, Todd created the world’s first major REMI Broadcast Hub that promotes centralized technology and decentralized staffing. While many in the broadcast industry struggled during the COVID-19 pandemic, Todd helped BMG pivot and become a leader in REMI workflow production allowing for the effective serving of clients worldwide.

Todd is a sought-after live broadcast director for a wide range of programming. This includes music, news, and entertainment, series, and specials. Recently, Todd directed two of Netflix’s cast talk shows “Geeked”, one for Cowboy Bebop, the second for The Witcher, which was shot in London.

For MGM, Todd has directed, Rocky IV the Director’s Cut movie premiere, and The Raging Bull 4K Screening. For Amazon, Todd directed a concert with Andra Day and for Oprah: A performance with Andra Day. For IMDb, Todd has directed live post Emmy and post Oscar shows. Todd has also directed 3 days of live 90-minute shows at SXSW for Mashable/Twitter called “The Mashable Show”, as well as several live broadcasts for truTV’s Impractical Jokers at Comic-Con.

Todd has served as Executive in Charge of Production for hundreds of shows, most recently two 2021 Daytime Emmy awards show. One of which was the first to ever be produced in a virtual environment, with a REMI production set up.

Todd keeps BMG active on the global stage, collaborating with both domestic and international partners. BMG works with companies interested in producing shows for the North American market, as well as with American companies creating content for international markets.

Todd has built an impressive senior and middle management team of broadcast industry leaders who take ownership in their areas of responsibility.

Photo Gallery
Book Todd Mason For Your Next Event